René Fabre
Welcome. This is one of my personal blogs, so it’s not about work per say. It's a personal journal of my life, interests and travels around the Pacific Northwest. My life long home.

I'm driving north up Lake Washington Boulevard for University Village Seattle this morning to teach a marketing class at the Microsoft Store.

I enjoy this lakeside drive and the views, but especially I like avoiding the morning commute up Interstate 5 into the city.


The autumn yellows and reds are just beginning. My CD player is freshly loaded with music and my iPhone with podcasts. Let's do this day!

It's mostly clear and sunny this morning and the fog is lifting over Lake Washington.

I'm enjoying the views over Lake Washington from the Leschi North Marina with the Bellevue Skyline and Cascade Mountains as a backdrop.
Posted by René Fabre at 5:12 PM No comments:


I drove up to Arlington this Tuesday morning to teach an Instagram marketing class to local real estate brokers. It was a lovely drive up from Renton. Just north of Everett on Interstate 5 I'm passing by Smith Island. 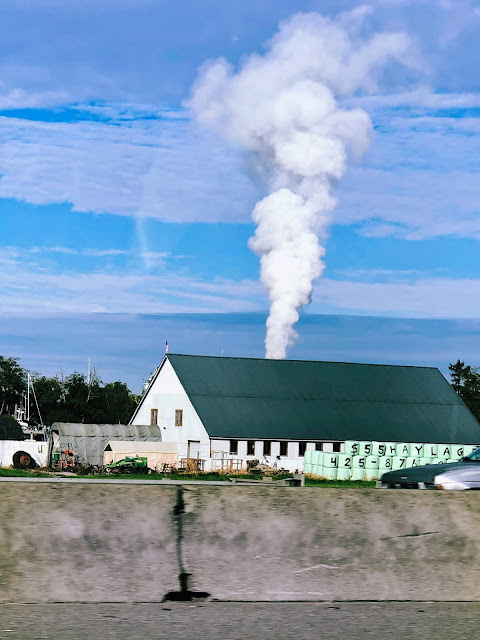 We started our class at Moe's Coffee Bar on Olympic Avenue. It's a beautiful October 1st. 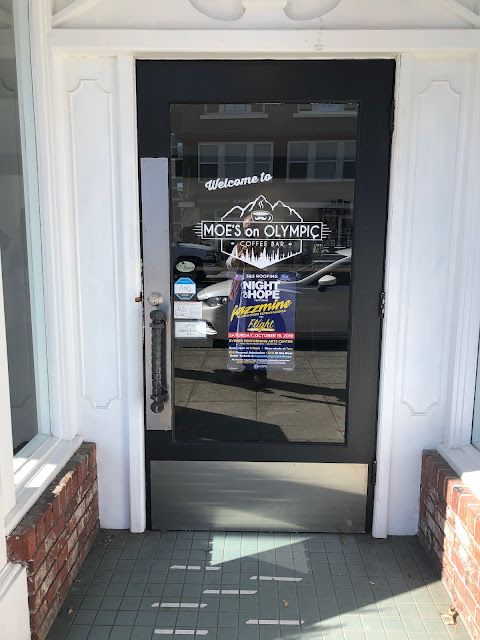 We chatted about content creation, hashtags, stories, Google's Snapseed photo editor and a few tips about taking photos with smartphones then hit the streets to explore the shops in downtown Arlington. 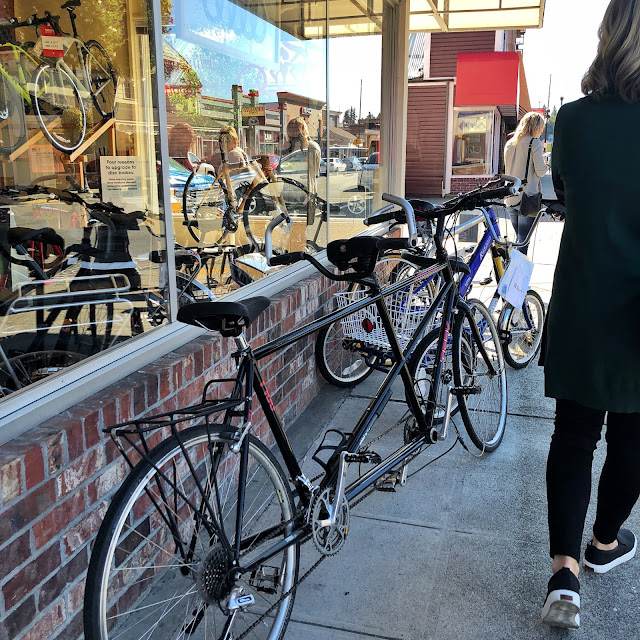 We stopped out front of Arlington Velo Sport Bicycle Shop on Olympic Avenue. There are so many wonderful locally owned small businesses here in town. 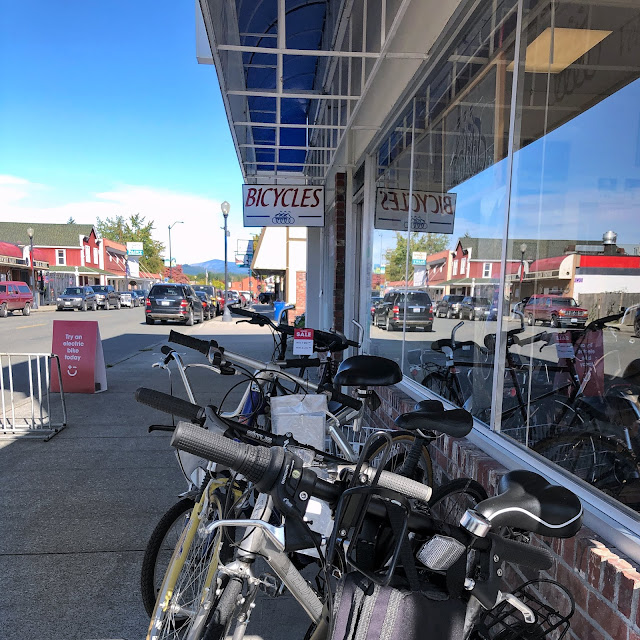 We didn't have time to stop here, but I just loved this inviting scene at Playa Bonita Mexican Restaurant! 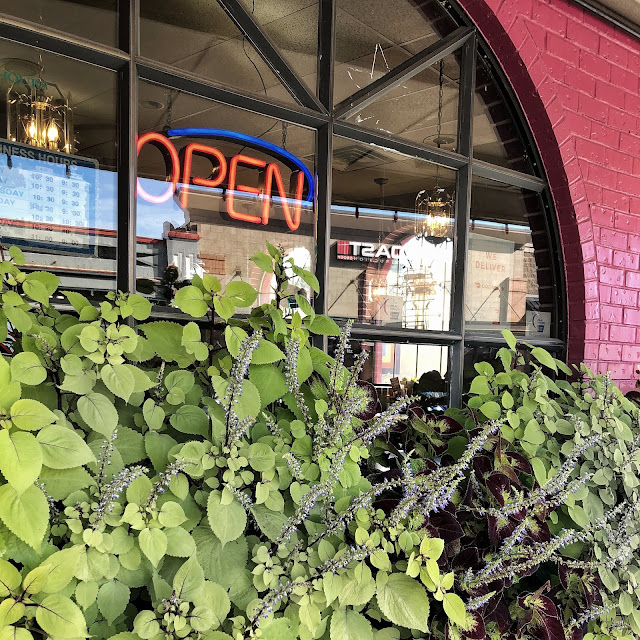 I'm talking to the group about the three axioms of hyper-local marketing... location, lifestyle, and community as we're walking down the street to Arlington Hardware taking lots of photos. 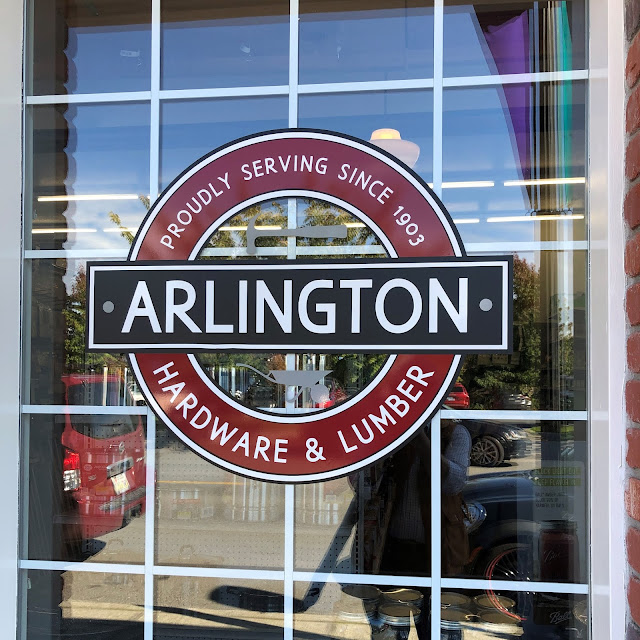 We crossed the street to gather in Legion Memorial Park to chat about marketing strategies, edit our content and posting to Instagram.

In the parking lot I just had to stop and chat a few minutes with this guy and his beautiful 1955 Ford Thunderbird. 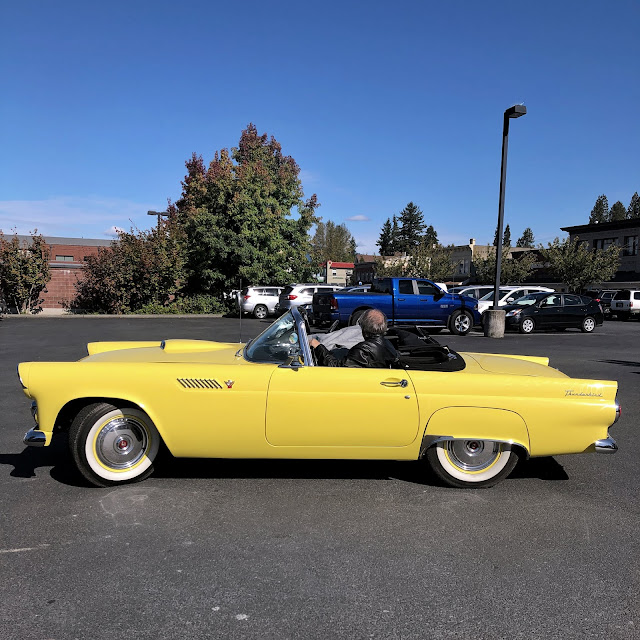 It was my kind of day and a great group of local real estate pros that made for a really fun class. We were so fortunate to have such a perfect early autumn day to play outside in lovely downtown Arlington.

Shout out to Moe's for hosting our get together! Great treats, super friendly crew and a fine cup of coffee! Thank You!!


I had a blast at the Renton River's Day Parade, Saturday, July 27, 2019. This post is about a few photos I took. It's a brief (where's Waldo) study about the people. One of the things I love about Renton, Washington, my hometown, is its amazing diversity.

Renton has become one of the most ethnically and racially diverse cities in the Pacific Northwest. It's not paradise, what city is, right? But for me it's home and I enjoy the wonderful mishmash of cultural backgrounds.

My family immigrated here from mostly Europe at the very beginning of the last century, circa 1900. A few arrived even a few years earlier. They started up here as laborers, mostly as miners, farmers, bakers, lumbermen, and carpenters.

They were working class people who showed up with nothing and worked hard to create businesses, homes, families, neighborhoods, and a better future for all whom they loved. That 'love' included many that were different than them. People from other places, other races, immigrants like themselves. You became a beloved friend and an extended member of the family if you could be trusted to do the right thing.

I spent the weekend looking at my photos from the parade with no real agenda when it hit me. These are my people. I opted for this post to share the photos that depicted them instead of the parade itself.

I enjoyed several delightful impromptu conversations. And I also celebrate the amazing diversity of food that's now available here because them!

Their stories are precious to me and they remind me of the those told by my grandparents. 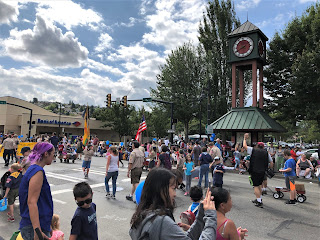 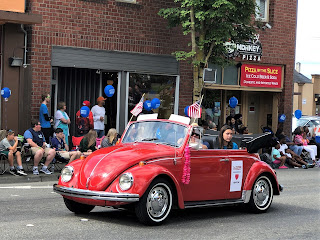 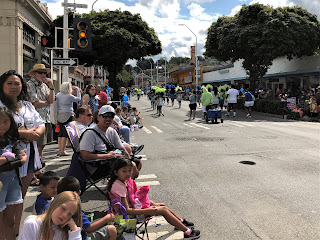 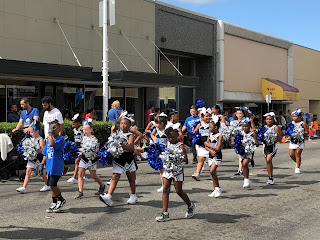 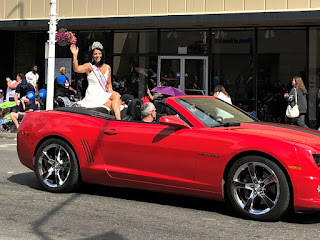 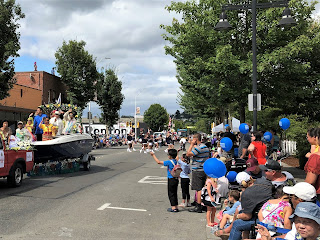 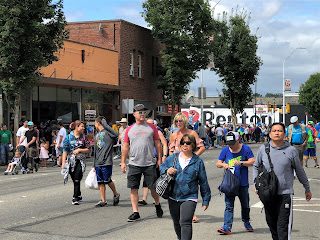 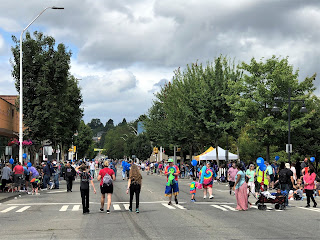 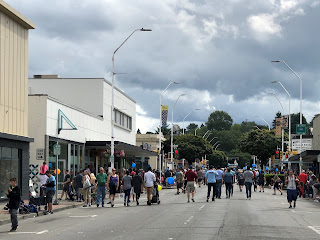 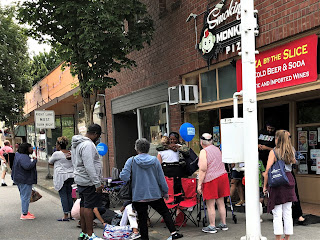 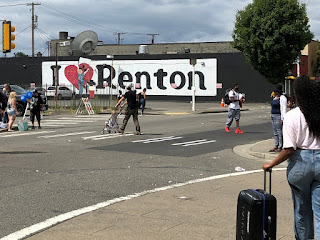 Posted by René Fabre at 8:17 PM No comments:

Into Seattle last week (Feb 7, 2017) ... Enjoying a favorite my kinda town skyline over north Beacon Hill, Rizal Bridge, through Chinatown to Capitol Hill. I'm off the Freeway just cuz. It's not about saving time, but having some quality time.

Over years (and several of them) I worked downtown or traveled a lot to downtown and inner city neighborhoods for appointments, classes, etc. I lived on Capitol Hill (1978-1983) when I was involved with Cornish School of the Arts and Soundwork Studio at And/Or Arts up on Pine and Broadway in the old Odd Fellows Hall.

This was one of my favorite chapters in life and I refer to this era in the city as my early Gothic period. Then you'd see many on Broadway dressed in black (Johnny Cash?), lots of leather, boots, silver rivets, armor, (wallet) chains, and spiked (rainbow) hairdos... Those were the days my friends... About future, art was important, so were new ideas and their exploration. I'm blowing the dust off and renewing a few of my old oaths and pledges.

But no matter who I am, who you are, who "they" are... Most often back then we'd all find ourselves together in the city at a place like the Comet Tavern. We'd all be saddled up to the bar discussing art, music, theater, literature, politics, the future, and life the universe and everything while smoking hand rolled cigarettes from the Top Tobacco can on the bar, drinking cheap beers from the tap by the pitcher, and crunching peanut shells on the floor.

I love Seattle. I love what it was and (most of the time but not always) what it's becoming... Keep it real. Keep it local. Share. Love. Contribute. Enjoy. Explore.

Posted by René Fabre at 6:07 PM No comments:

Life is Quite Duckie here in the Pacific Northwest this week...

I had a wonderful time in Issaquah yesterday at Gilman Village teaching a mobile social media marketing class. We went from store to store and had a great encounter with the owner and staff at the Lucky You. What a fun stop! Lovely unique home decor and gifts. As we visited I discovered these ducks... so apropos for the occasion! We had snow on the ground and it was raining mixed with snow! It brought a chuckle to me, I remember as a kid in grade school wearing one of those yellow slicker raincoats. 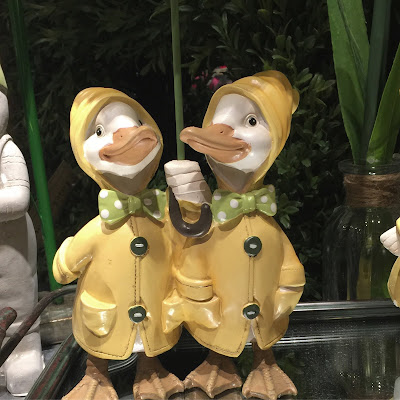 Posted by René Fabre at 4:58 PM No comments:

My longtime friend Don Gardner had Green River Music in Auburn, Washington for 40 years. It was a gathering place for many musicians like myself in the area. In April 2016 Don decided to close the store and threw a party. I made this short video of the occasion to pay tribute. Here's a few minutes with some old friends and acquaintances doing what musicians do best when they get together, play!

Posted by René Fabre at 3:27 PM No comments:

Then and Now... a son reflects

Today is my Dad’s birthday, so I’m thinking about him. I’ve posted about him before and thought I’d share something today, but I didn’t want to repeat myself too much so I took a little trip back through my Activerain archives this week to take a look see and that proved to be quite revealing.

One thing really stuck out and that was how much my technology has changed since I started blogging in the rain back in November 2008.

One of my early posts back in March 2009 included a little video. The soundtrack was from an evening I sat in with Dad at Cavallini’s in Cle Elum (1976).

As I'm reading I start to laugh...

I’m listening to tunes on my iPod. Does anyone still have one?

I used a Flip Mino camera to shoot the video. I had two, they're both dead in a drawer somewhere.

My phone, a Blackberry 8330 in my shirt pocket. Small screen, but I liked the keyboard.

I had a Dell Latitude D610 with 512 Mb RAM, 40 GB hard drive, Windows XP and it was heavy. It had WiFi, but hardly anyone except a few hotels had it then and you had to pay extra to use it!

I lugged a projector around that cost about $2,000, weighed over 10 lbs, had fuzzy focus, but you could heat a large room with it.

This morning 2008/2009 seems like a very long time ago from a certain technology point of view.

Who’d a thought then that over 70% of us now online are on a mobile device! That we’d text more than talk, yet ironically many talk to text! My iPhone 6 Plus is my office and my portable media production center. I have a Magnasonic mini projector that’s light with WiFi, USB, HDMI, Bluetooth, audio out, runs on battery for about an hour, and it’s footprint is smaller than my phone and cost about $300.

My HP laptop has a beautiful high resolution 1080p screen, uses 802.11ac high bandwidth WiFi, and it’s so light I have to check my tote bag to make sure I didn’t forget it.

I rarely burn CDs anymore and most of the software I use is cloud based. I can read and write to my French cousin using a translator, live stream video from several platforms, video chat instantly, and augment reality with Pokeman GO. Let alone talk to Cortana, Siri, or Google to search, map, and shop. That’s a lot of change in just a few years...

It’s all a matter of perspective. When Dad picked up his first accordion in the early 1930s they weren’t electric. It wasn’t until the late 1940s that he’d attach a ‘silver dollar’ microphone and use a tube amp.

I remember him talking about the first radio to show up on Tobin Avenue when he was a kid. The neighbors would gather on the front porch to listen to shows like Amos n’ Andy, Bing Crosby, and Burns and Allen.

His first recording device was a wire recorder. We played with it as kids in the late 50s. The wire would often break then instantly spring off the reels into a great big tangled ball that would take us hours to unravel. In the 1970s Dad got his first all new bleeding edge electronic organ accordion built for him by Petosa Accordions of Seattle.

So, Happy Birthday Dad! You'd a been 95 today! It's been fun running 'then and now'  threads about you and technology.

Enough about work... let’s go for a drive originally posted to Activerain on March 10, 2009.

Posted by René Fabre at 5:04 PM No comments: